Each Fall season in the marsh estuaries of the southeast, anglers that aren’t too consumed with deer hunting and football get to experience some of the best Trout fishing you will find anywhere. Even the famed Louisiana fishery has to tip its hat to the southeast Trout run. Things start to get interesting in October and only ramp up as the water temperature drops below 70 and night time temperature begin to stay in the 50s or below consistently.  The Trout will continue to bite aggressively into February before transitioning into their Spring patterns.

No one is more in tune with the habits of Speckled Trout than Capt. Jamie Hough of Flat Spot Charters in Charleston, South Carolina. With a lifetime of fishing in the lowcountry and a log book with detailed notes that spans almost 2 decades of fishing charters, he’s managed to dial a few things in and he was happy to share some pointers.

Jamie suggests that you consider the Trout’s motive when you are narrowing down your location. Trout, and all fish, are essentially performing a “cost / benefit analysis” and want to be in the areas that require the least amount of calories burned per calories consumed. In other words, they don’t want to work any harder than they have to in order to find a meal.

It’s All About Location

Where this becomes imperative is during full moon and new moon tides when you can see as much as a 9 foot tide swing depending on which part of the coast you’re on. Capt. Hough explained that while some anglers will stay near the inlets and catch, perhaps, a dozen “pecker” Trout, he prefers to find winding creeks with tight turns when the tides are higher than normal. These tight bends provide relief from the current for the Trout and satisfy the requirements of the cost / benefit analysis.  Rather than catching a few Trout, Jamie describes days of fishing such as “110 Trout in two and a half hours and 108 of them were between 18 and 26 inches”. 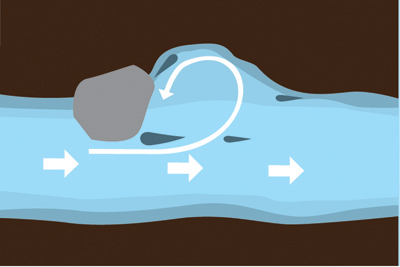 Illustration of an eddie

Once you have selected some areas that fit the description, Jamie recommends that you look for two other traits to dial in your spot even closer; clean water and current. Too much current can be a bad thing, and no current at all can be even worse. Trout primarily hunt by sight and they prefer to ambush passing prey. They need the current to push the prey (baitfish or shrimp) through and they need the clean water so they can see them.

The Spot Within the Spot

Now that you have found a creek bend with clean water and current, it’s time to zoom in even further and find the “spot within the spot”. Hough, knowing that Trout will use the current to their advantage, looks for eddies, seams, and rips. These are visibly noticeable differences in the current caused by sudden changes in depth (usually resulting in a “rip”), fast moving water meeting slow moving water (usually resulting in a seam), and turbulence from water meeting from different directions causing a swirl (eddies). Any other terrain features such as docks, rip rap, trees, or oysters are a major bonus.

Now that you have found a spot that meets all of this criteria, it’s time to give it a try. Jamie fishes with a variety of baits ranging from live shrimp under a popping cork, to curly tail grubs, to free lined DOA shrimp. We’ll break down several techniques , baits, and presentations.

Probably the most well known and commonly used method is the popping cork with live bait. Jamie prefers the Bomber Paradise Popper paired with a 1/0 Owner live bait hook. Capt. Hough strongly suggests that you pay attention to the depth and adjust your leader accordingly. The fish are less likely to come toward the surface and find a bait suspended two feet beneath a cork when you are in ten feet of water. As a rule of thumb, begin your search within a couple of feet from the bottom but be vigilant for signs that the fish are suspended mid-column. Indications of suspended fish while cork fishing can be seeing your cork dart sideways before your bait has time to sink or noticing your shrimp being chased back to the surface.  Try to always allow your cork to drift with the current so that your shrimp is presented naturally. Using your judgment and making micro adjustments can be the difference in a good day and a spectacular day.

You can see that Capt. Jamie stays loaded with Bomber Paradise Poppers.

The second technique that Jamie mentioned is certainly not a new technique, yet it is often overlooked. A simple jig head and curly tail grub is still a deadly combination to chunk and wind in the marsh. Most often Jamie goes to a 1/4 ounce Bomber jig head and uses several colors until one proves to be out-fishing the others. In slower current or shallower water a 1/8 ounce jig head can be preferable for a slower fall and therefore a longer presentation in the strike zone. Cast your bait into the current and vary your retrieve until you find one that works best. Presentations can vary from a slow steady retrieve to a “hop-hop-pause” cadence. Just keep in mind what you are attempting to imitate.

The final technique that Jamie discussed with me in depth was free lining DOA shrimp. A DOA shrimp tied straight to a fluorocarbon leader presented by allowing it to be swept with the current is a deadly winter tactic that I have used often myself. Hough says to just imagine a shrimp being carried along with the current and do your best to create that presentation. When casting into the current, retrieve your line just fast enough to keep most of the slack out. When presenting your bait with the current, start with your rod tip near the water and fan slack out by raising your rod overhead and returning it to just above the surface. This will provide enough slack for a natural presentation while still being able to set the hook if a strike is detected. Because your line will likely have a considerable amount of slack, detecting the strike can be tricky. Even a subtle tap warrants a hook set.

A Day of Winter Trout Fishing

Go Try for Yourself!

Winter Trout fishing can be some of the most productive fishing of the year. Conquering it is not easy and requires some planning and diligence. Narrow down your areas using tools such as Google Earth or topographic charts. Once you’ve found your areas, narrow them down further by looking for subtle differences such as docks, bluffs, shells, and current variations. Finish it off by dialing in the right presentation whether it be live bait or artificials. Increase your chances by adding scent to your baits with ProCure in shrimp or ladyfish flavor. Most importantly, and as always, putting your time in will pay off and you’ll know that winter isn’t just for football and deer hunting.

Special thanks to Capt. Jamie Hough, Elite Series Redfish Angler, 2015 IFA National Champion, and owner of Flat Spot Charters and Redfish Mafia. You can reach Jamie to book a charter at www.flatspotcharters.com .